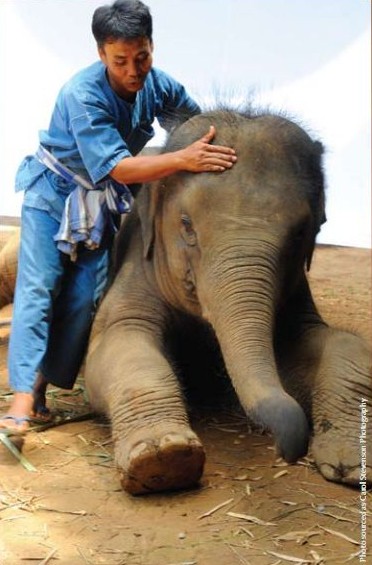 Lung Lord is recommended by John Roberts, Director of Elephants, Anantara Golden Triangle Elephant Camp: The trust between Lychee and the old man is unmistakable. Born in a small village in north east Thailand, Khun Lord, Anantara Golden Triangle’s Resort & Spa Elephant Camp’s most experienced mahout, comes from a long line of mahouts and the skills that he has learnt has been passed on from generation to generation.

“I would first find a song with a command in the words and sing and tickle her on different parts of her body, most of the other mahouts thought I was crazy singing to an elephant but that soon passed when they saw the results.

“To think, one hundred years ago there were over 200,000 wild elephants roaming Thailand now there are only 2,000,” he explains as Lychee gently nudges him with her trunk, “These are the most intelligent creatures on earth and our nations symbol they deserve our utmost respect.”

Khun Lord starts singing sweetly as he tickles Lychee’s trunk and she automatically lies down beside him and closes her eyes, “This song is a sweet lullaby, the lyrics mention to lay down your head and go to sleep. See how smart she is, she has a great memory. Don’t tell the other elephants but I also think she’s by far the cutest elephant here at the camp,” he gently smiles at his one ton beauty as he softly starts singing to her again.

When asked what is the favorite part of his job, Khun Lord gestures towards the slumbering giant, “This is my favorite part of my job, the special bond that you have between elephant and man, I feel so proud of the mutual respect, it’s a bond that is rare and a bond only between a mahout and elephant,” he pauses for a few seconds then pipes up, “Oh and I love to sing, you may have heard of a horse whisper before but I bet you’ve never heard of an elephant singer,” and with that he breaks into another melodic tune.