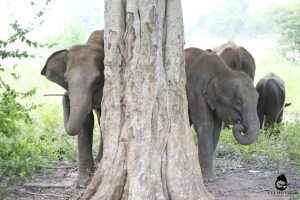 On this visit, we spent four amazing days in the field working on a new project. During that time, we observed Vibhi in the free range area. We were delighted to see his confidence is very high! Although usually quiet and slow, he can be bold and assertive when he wants.

Vibhi is certainly growing taller at 4’6”, a nice height for a 3-year old elephant. Compared to other babies his size, his legs are long. In the past, we observed a small papilloma on his trunk. It has grown and others have appeared. A papilloma causes a bump on the skin and may be irritating. It is caused by a virus. Orphans that did not acquire enough of their mother’s antibodies through suckling are more susceptible to the virus. Nevertheless, there’s no need to worry. When his body develops enough antibodies, the papillomas will go away on there own. He’ll be just fine.

Vibhi frequents the same friends, Ruby and Deewagapi, and he’s also happy to spend some time on his own. He seems to tolerate the little ones but does not seek them out. His gentle allo-mother, Samari, visits and looks after him and Ruby. We are very happy that she is such a committed and gracious foster parent. The photo features Vibhi (right) and Samari (left) on either side of tree.

During this visit, we inspected our new surveillance system, donated 36 pairs of weatherproof boots to the keepers and staff, and worked on a new project. We’ll keep you updated!

A huge ‘Trunks up!’ and thank you to Vibhi’s foster parents. 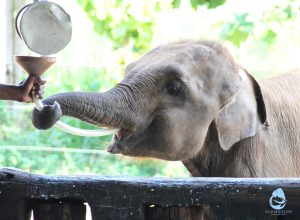 Not much has changed since our last visit. Vibhi is still comfortable in his family group with Samari, his allo-mother, Ruby, and Deegawapi. The group is released together for feeding. Vibhi is always a gentleman, and let’s the ladies go first. It’s very sweet to see how he still shy and hesitant with the keepers. We take this as a good sign. He should not feel too comfortable with people as this could get him into trouble when released in the wild.

He has grown taller but hasn’t filled out much. Vibhi has always been a little on the thin side. And, it is normal for the Transit Home orphans to be slightly underweight compared with their wild counterparts. But, he is in good health, and we’ll try to get him a little extra milk, if he’ll take it!

Elemotion Foundation is currently working on installing a camera surveillance system for the orphans of the Transit Home. This will allow the vets and keepers to keep an eye on Vibhi and the other babies from a central location. We are looking forward to seeing this improvement installed.

Three-year old Vibhi is doing wonderfully.  He is incredibly sweet and a somewhat shy little guy.  A gentle ladies man, he is still part of the same tight knit group consisting of girlfriends, Ruby and Deegawapi, and his beautiful allo-mother, Samari.

Due to his sweet character, the well-meaning keepers have been showing him some extra attention. Even though this sounds nice, the head vets and Elemotion agreed to put a stop to it. We have Vibhi’s best interest at heart. When he is released in the wild, he will have a better chance at survival if his association with humans is neutral.  No worries about him feeling lonely, his family group shows him plenty of attention.

Vibhi’s new video shows him walking up the feeding station and drinking his milk.  You’ll notice his signature drinking technique with his trunk wrapped around the feeding tube.  You’ll also see his cheeks bulge as he fills them with milk as he drinks. That’s our Vibhi!

Elemotion Foundation travels to southern Sri Lanka to visit the Vibhi at his orphanage, the Elephant Transit Home.  Learn more about the orphanage and watch Vibhi receive his milk formula.  There are also special appearances by best girlfriend, Ruby, and allo-mother Samari.